Is Krav Maga difficult to learn and to train? 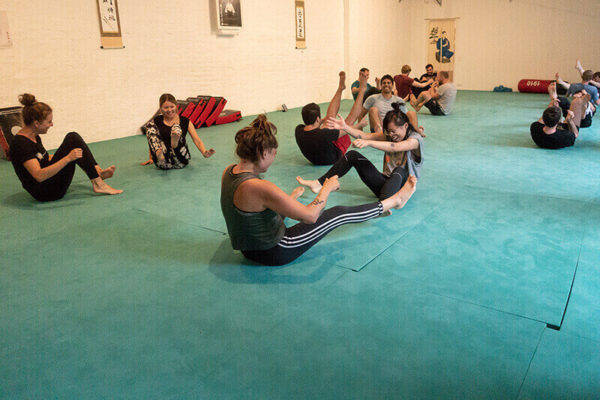 What is Krav Maga as a fighting system, more or less easy or difficult to learn?

Krav Maga, as its name in Hebrew indicates (close combat), is a close combat system based on learning self-defense and attack techniques against one or more aggressors.

Invented by Imi Lichtenfeld in 1948 before the creation by him of the IKMF in 1996, Krav Maga was developed “in blood”. Indeed, during the first Israeli war, with his experience in many combat sports, Imi was called by the government in place at that time to teach the soldiers a close combat system. Soldiers were taught how to defend themselves and immediately went to “test” the techniques in close combat against real enemies, in wartime. Feedback was immediate, and the techniques were improved as they failed and succeeded. Krav Maga had to be simple, quick to learn, and highly effective.

Years later, Imi retired from the army but continued to teach Krav Maga. He naturally began by adapting the techniques of Krav Maga, until then reserved for the military, to civilian training. The goal is different (the military man ends up eliminating his enemy and continues to fight to achieve an objective, while the only goal of a civilian is to neutralize his aggressor and to flee, to be safe).

Is Krav Maga difficult or easy to learn; but in comparison to what?

Here is an interesting question; one thing is difficult or easy to learn compared to another thing. If we compare Krav Maga to other fighting systems, it is difficult to judge which system or others will be easier or harder to learn, given the number of fighting systems that have been around for millennia that people have been fighting, and that is still practiced around the world, either as a combat sport or as a self-defense system.

Without accurate data and a thorough investigation beyond the scope of this article, it is not possible to give a simple answer to this question, and to clearly state whether Krav Maga is easier to learn than boxing or Tae Kwen Do, or on the contrary more difficult to learn than Brazilian Jiu Jitsu or Kick Boxing.

How does Krav Maga training differ from most combat sports currently practiced?

It can be said that Krav Maga is a popular and unique close combat system.

In today’s combat sports, one of the goals of the training is to fight on a flat surface defined by precise rules, against a lone opponent, at a given time in advance, for which one can prepare both physically and mentally, an opponent who can only attack with certain authorized techniques, The opponent can only attack with certain authorized techniques, and cannot use others under penalty of being punished, disqualified and losing the fight, obviously under the watchful eye of a doctor in case one of the fighters needs to be treated quickly, as well as a judge who has full authority to stop the fight at any time if one of the opponents is no longer able to fight. Finally, it would never occur to anyone to come to these fights with a knife, a stick, or any other weapon of fists.

None of this exists in Krav Maga. There is no referee, no doctor, no rules, no delimited surfaces, no physical or mental preparation for a specific date of aggression, and potentially several opponents, possibly armed, whose goal is to reach your physical integrity, thus sweeping away your possibility of abandoning the fight or being able to stop it in case of injury(ies).

Regarding the physical aspect, Krav Maga training does not require any particular physical condition; if you can run for 30 seconds, you will be able to train in Krav Maga and successfully learn to defend yourself, like a physical confrontation following an assault in the street does not last more than 30 seconds before the defender or the attacker gets the upper hand on the other.

It becomes possible for anyone to be able to train in Krav Maga. For example, people who do not have enough joint mobility and therefore cannot raise a leg towards an aggressor’s head, or who suffer from a scapula problem and cannot raise a hand above their head, can learn to defend themselves, using many techniques that will adapt to the physical level of the practitioner who will learn to use mainly the technical tools that are best suited to him or her, being aware that he or she can do “anything” and use any object to defend themselves.

What are Krav Maga’s techniques based on?

Krav Maga is based, among other things, on simple principles such as direct strikes to certain vital points of the opponent, which therefore do not need to be powerful, or precise, the vital points being easy to target (nose, testicles, knees etc…), and the rate of pain inflicted on the opponent being so high that few strikes will be necessary to be effective and to allow the attacked to flee.

Another basic principle of Krav Maga is the systematic use of defensive techniques, where the starting point of the movement is a natural reflex. For example, if a ball is thrown at you, flies over you in a bell shape, and its circular trajectory tells you that it will land on your head, your reflex will most likely be to cross your arms over your head in order to protect yourself by blocking the ball with your forearms, preventing it from hitting you in the face and injuring you. This reflex is the basis of many defense techniques called “Techniques against circular motion” which will be found in defense techniques against various attacks ranging from a knife attack to a circular kick, or a simple slap. Another example, if an attacker tries to strangle you with his hands, or even worse if you find yourself with a rope around your neck, your reflex will be to immediately bring your hands towards the hands or the rope that is preventing you from breathing to try to remove it. This reflex is the starting point for defense techniques against throat grabs, where the hands will also go to the throat to try to remove the attacker’s hands from it using a certain technique called “Plugin motion”, while you kick the attacker’s genitals.

During our Krav Maga training in Berlin, these reflexes will just be optimized, and only slightly changed. Since these reflexes do not need to be learned, it can be considered that everyone already knows the basics of learning most of the self-defense techniques offered by Krav Maga IKMF.

Here we are in front of solid arguments to say that Krav Maga is not difficult to learn, no matter what your physical condition is, if your goal is to be able to defend yourself one day in the street against an aggressor, it is certain that IKMF Krav Maga training will provide you with simple to learn and effective solutions!

If you have any questions or would like to participate in a free trial Krav Maga training with us in Berlin, please email us, we will be happy to give you a quick answer.