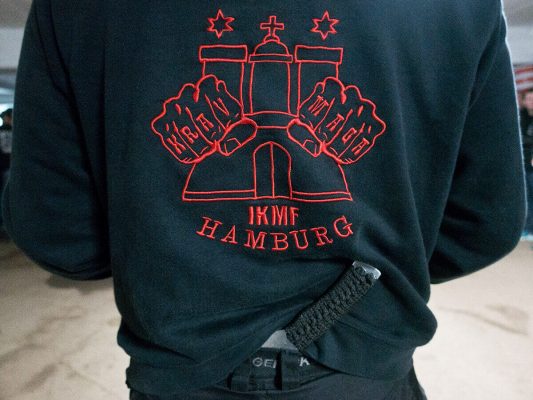 All over the world, there are members of the Krav Maga Elite who regularly offer self-defense seminars on a variety of specific topics. There are also these offers in Germany.

Just last weekend, Israel Cohen, one of the most qualified Krav Maga instructors, came to visit Hamburg. Cohen is a member of the IKMF Global Instructor Team (GIT) and with his Expert 4 rank one of the most highly graduated instructors worldwide. He made a guest appearance with our friends from the IKMF Hamburg. Together they held a seminar on “Dynamic Knife Defenses”.

Unfortunately, knives attacks are nothing unusual in Germany nowadays. On the contrary, recently in Berlin, the number of criminal offenses within 24 hours of knife attacks in clubs or on public streets has risen sharply as a result. Knives belong to the category of stabbing weapons, are legal and therefore very easy to obtain. It is also no problem for children to possess a knife. Knives are popular weapons because they are easy and simple to hide on the body. This means that you can carry a knife unseen even in no-weapons zones and generally in public spaces. Criminals like to exploit this advantage over other weapons. Also, because a knife attack is a silent, yet extremely effective and life-threatening attack.

In order for an attacker to get what he wants, e.g. in a robbery, he often uses a knife as leverage against his victim. It is not uncommon for a knife to be used as an offensive weapon. Such a knife attack is considered very dangerous because the victim only notices afterward, i.e. after the stabbing, that he has been injured. Especially since the attack is so quick and silent.

Since the founding of Krav Maga by Imi in 1948, defense against knife attacks has been an integral part of the self-defense techniques curriculum.

The self-defense seminar proposed by Israel Cohen covered a large part of these techniques. There were scenarios involving sharp threats and brutal attacks that would result in bodily harm. Since such attacks are quick, it is almost impossible for the victim to survive such attacks at all without the knowledge of a few techniques.

As part of the IKMF, the Cityskills Berlin team was also present at the seminar in Hamburg. Sylvain traveled with a group of motivated Kravists and met 60 other teachers and students from all over Germany. Training took place in realistic conditions: in a dimly lit garage, wearing normal clothes and in temperatures around 0°C. It was an incredible atmosphere and a great, educational afternoon!

We trained together for three hours against these special knife attacks, followed by several training scenarios, before the seminar was concluded with a final exercise. There was always the necessary seriousness, but above all, it was great fun!

We would like to thank the organizers of the ” Dynamic Knife Defenses ” seminar, especially IKMF Germany, IKMF Hamburg, and Israel Cohen. We are already looking forward to the next time!

You would also like to attend an IKMF Krav Maga seminar in Berlin? No problem! Come by any time for a free krav maga trial training. You can find our training times here and if you have any questions, just write to us via our contact form or Facebook.